The mission of the Washington Redskins Original Americans Foundation is to provide resources that offer genuine opportunities for Tribal communities.  We will work as partners to tackle the troubling realities facing so many tribes across our country. The Foundation utilizes the national platform of professional sports organizations and their partners to address the challenges in the daily lives of Native Americans based on what Tribal leaders tell us they need most. 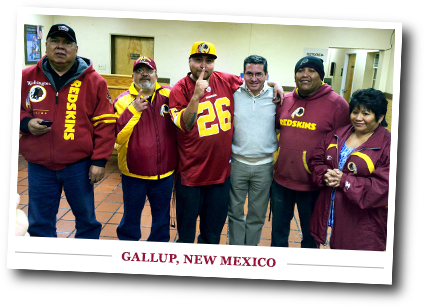 To Everyone in our Washington Redskins Nation:

Several months ago I wrote you about my personal reflections on our team name and on our shared Washington Redskins heritage. I wrote then – and believe even more firmly now – that our team name captures the best of who we are and who we can be, by staying true to our history and honoring the deep and enduring values our name represents.

In that letter, I committed myself to listening and learning from all voices with a perspective about our Washington Redskins name. I've been encouraged by the thousands of fans across the country who support keeping the Redskins tradition alive. Most – by overwhelming majorities – find our name to be rooted in pride for our shared heritage and values.

"There are Native Americans everywhere that 100% support the name," Torres-Martinez Desert Cahuilla Indians Chairwoman Mary L. Resvaloso told me when I came to visit her tribe. "I believe God has turned this around for something good." She told me that it was far more important for us to focus on the challenges of education in Native American communities. I listened closely, and pledged to her that I would find ways to improve the daily lives of people in her tribe.

What would my resolve to honoring our legacy mean if I myself—as the owner of and a passionate believer in the Washington Redskins—didn't stay true to my word? I wanted and needed to hear firsthand what Native Americans truly thought of our name, our logo, and whether we were, in fact, upholding the principle of respect in regard to the Native American community.

So over the past four months, my staff and I travelled to 26 Tribal reservations across twenty states to listen and learn first-hand about the views, attitudes, and experiences of the Tribes. We were invited into their homes, their Tribal Councils and their communities to learn more about the extraordinary daily challenges in their lives.

"I appreciated your sincerity to learn about our culture and the real-life issues we face on a daily basis," Pueblo of Zuni Governor Arlen Quetawki told us after we toured his reservation. "I look forward to working together with you to improve the lives of Native Americans in any way possible."

The more I heard, the more I've learned, and the more I saw, the more resolved I became about helping to address the challenges that plague the Native American community. In speaking face-to-face with Native American leaders and community members, it's plain to see they need action, not words.

Yes, some tribes are doing well. And in our candid conversations, we learned that we share so much with Indian country. We find their appreciation of history, legacy, caring for their elders and providing a better future for their youth inspirational and admirable.

But the fact is, too many Native American communities face much harsher, much more alarming realities. They have genuine issues they truly are worried about, and our team's name is not one of them. Here are just a few staggering, heartbreaking facts about the challenges facing Native Americans today:

These aren't rare circumstances. These are the unfortunate facts found throughout Indian country today.

I've listened. I've learned. And frankly, its heart wrenching. It's not enough to celebrate the values and heritage of Native Americans. We must do more.

I want to do more. I believe the Washington Redskins community should commit to making a real, lasting, positive impact on Native American quality of life—one tribe and one person at a time. I know we won't be able to fix every problem. But we need to make an impact.

And so I will take action.

The mission of the Original Americans Foundation is to provide meaningful and measurable resources that provide genuine opportunities for Tribal communities. With open arms and determined minds, we will work as partners to begin to tackle the troubling realities facing so many tribes across our country. Our efforts will address the urgent challenges plaguing Indian country based on what Tribal leaders tell us they need most. We may have created this new organization, but the direction of the Foundation is truly theirs.

Our work is already underway, under the leadership of Gary Edwards, a Cherokee and retired Deputy Assistant Director of the United States Secret Service, as well as a founder and chief executive officer of the National Native American Law Enforcement Association.

Because I'm so serious about the importance of this cause, I began our efforts quietly and respectfully, away from the spotlight, to learn and take direction from the Tribal leaders themselves. In addition to travelling and meeting in-person with Tribal communities, we took a survey of tribes across 100 reservations so that we could have an accurate assessment of the most pressing needs in each community.

The stories I heard and the experiences I witnessed were of children without winter coats or athletic shoes; students in makeshift classrooms without adequate school supplies; text books more than decades old; rampant and unnecessary suffering from preventable diseases like diabetes; economic hardship almost everywhere; and in too many places too few of the tools and technology that we all take for granted every day—computers, internet access, even cellphone coverage.

In the heart of America's Indian country, poverty is everywhere. That's not acceptable. We have so much, yet too many Native Americans have so little.

Our work has already begun:

These projects were the first of many and we currently have over forty additional projects currently in process. We look forward to telling you more about these as our work proceeds.

For too long, the struggles of Native Americans have been ignored, unnoticed and unresolved. As a team, we have honored them through our words and on the field, but now we will honor them through our actions. We commit to the tribes that we stand together with you, to help you build a brighter future for your communities.

With Respect and Appreciation,

P.S. Throughout this journey, there have been many incredible moments. One of my favorite fan moments took place in Gallup, NM – to the cheers of dozens of Washington Redskins fans. As Pueblo of Zuni Governor Arlen Quetawki noted, "We even had an unprompted welcoming party of Washington Redskins fans from Zuni and Navajo greet you when you departed from the airport!" The passion and support for the Burgundy and Gold throughout the country has been overwhelming.

We'll be updating this site with more information regarding the foundation.

Sign up to receive more information and updates regarding the foundation.

for your interest. We will be in touch with you shortly.